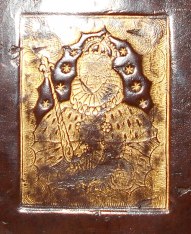 In this post, we return once again to Hatfield for a further selection of highlights from Lord Salisbury’s splendid book collection. This gilt-stamped image of Queen Elizabeth I is a poignant reminder of her close connections with Hatfield and the Cecil family.Having said that, the queen’s image appears on what was described by “Mr Nixon” (British Museum) as one of the earliest commercial bindings produced in England.

This was probably a book that has been here from the earliest days. Other items in the collection arrived from other places, such as the Froben Augustine I’ve discussed before. Imagine also my delight at finding this copy of the Church Councils (not because they are Church Councils though). 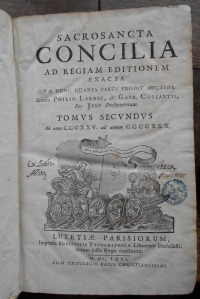 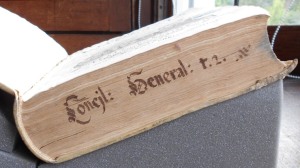 The title page is inscribed “Ex bibliotheca abbatiae Murronen[sis]”. The Murronites, or Celestines (they changed their name after their founder, Pietro de Murro, was elected Pope and assumed the name Celestine V), were a branch of Benedictine monks founded in the Abruzzo region in  the 13th century, and it is possible that the library in question was in fact that of the order’s mother house at Sulmona. But what was really nice was the title inscription on the lower edge of the volume, now of course somewhat redundant because of our tendency to shelve books with the spine facing the room. The inscription though is a good example of the different ways in which books were stored in the past. In this case, the volumes appear to have been shelved flat, stacked perhaps in small piles, with the lower edge facing out – unlike the Froben Augustine,  which has the volume numbers written on the fore-edge.

A final (for now) feature was something my colleague Peter found: The Naturalis historia of Pliny the Elder edited by the humanist scholar Beatus Rhenanus (1485-1547), and printed in Lyon in 1582. In an early calf binding, it contains substantial manuscript supports. This kind of recycling is not entirely uncommon, but can lead the unsuspecting cataloguer or library surveyor to a pleasant surprise. The fragments here appear to be of a medical text written perhaps in the 15th century, describing various simples (i.e. individual plants or animals, or their parts), their qualities according to humoural theory, and their use in treating various illnesses.

My thanks to Lord Salisbury for permission to blog about individual books in the collection. Please note that the Collections Department at Hatfield is closed for enquiries until May 2015.