I’m taking the easy route over Easter and will be blogging about removing mould from books in the next instalment. However, here’s an interesting short post on “counting books” in a library collection as part of the nation-wide effort to update the Directory of Rare Books and Special Collections, edited by Karen Attar, Rare Books Librarian at Senate House Library in London. Although in this case the quantification of the collection was limited to what has already been catalogued, it is also a very useful tool to pull together, relatively quickly, a statistical breakdown of items in a collection that still await cataloguing (so-called “hidden collections“).
Two years ago, I did a report for the Angus Library in Regent’s Park College, Oxford, which concentrated on their hidden collection of several thousand books. They were not entirely sure how many uncatalogued items they had, from what period the books dated and where they had been printed. In addition, I recorded languages, provenances, interesting bindings and checked pre-1800 books against national STCs. The advantage of looking at each book was that I could also make some general observations about the physical state of this part of the collection.
Without cataloguing the individual items to antiquarian standards (which is what is currently happening), I was able to present a relatively detailed overview of the Angus’s hidden holdings.

Reporting collections for the Directory encouraged librarians to delve more deeply into their collections. Jesus College in Oxford was founded in 1571, and its library had been built by 1628. Owen McKnight, the current Librarian of Jesus College, reports:

The guidelines for the new edition of the Directory of Rare Book and Special Collections ask libraries to indicate where possible how many printed books they hold from each century. I didn’t know how the Fellows’ Library measured up but I was keen to find out, so I asked the Oxford University cataloguing team to extract the dates of our books from the SOLO catalogue and set my graduate trainee to explore. 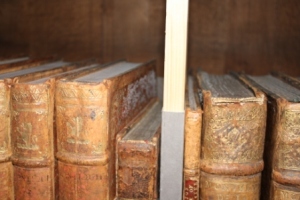 Mould is unfortunately a very common problem in book collections. It often manifests itself as fluffy white growth on the outside of a binding or on the edges. Mould occurs when airborne fungi spores settle on a surface in still air. This is why you often find it in environments which are in effect a micro-climate with little air-circulation and a high relative humidity (such as closed bookcases). The spores can be inactive for a long time, until the climate is favourable: within a temperature range of 10 to 35 degrees Celsius (the warmer the better) and a high relative humidity (RH) of over 65%, combined with organic material, mould spores will thrive! Mould is also regarded as a health hazard and suitable precautions need to be taken when handling objects affected by it. Serious outbreaks of mould should be treated by trained professionals.

Mould can often be discovered by the naked eye, but usually it is only by shining a raking light over the surfaces that the full extent of the outbreak becomes clear. UV-light tends to be a good tool, although using a simple LED-torch will also work.

Cloth and leather bindings are generally more susceptible to mould outbreaks, although it can sometimes also be found on paper, such as on the edges of a text block (usually because of dust). As with the prevention of insect damage, maintaining a stable environment (as cool as possible) and a RH below 65% is important. Storing books away from external, north-facing, walls is sometimes a good idea, and ventilating areas containing books helps to improve air-circulation. The books in these images were found in the Library at Kedleston Hall, where the collection is kept in historic, Robert Adam designed, book cases. Although these are beautiful pieces of furniture, they do not necessarily provide the best environment for these books. Because the collection is monitored frequently, the mould outbreak was discovered before it had spread to too many books. It was also limited to two book cases which are placed against exterior walls.

Early in February 2014, I assisted Ian Beaumont, a leather conservator, with cleaning these books. In the next post I will talk a bit more about the procedures for treating mould-infested books.